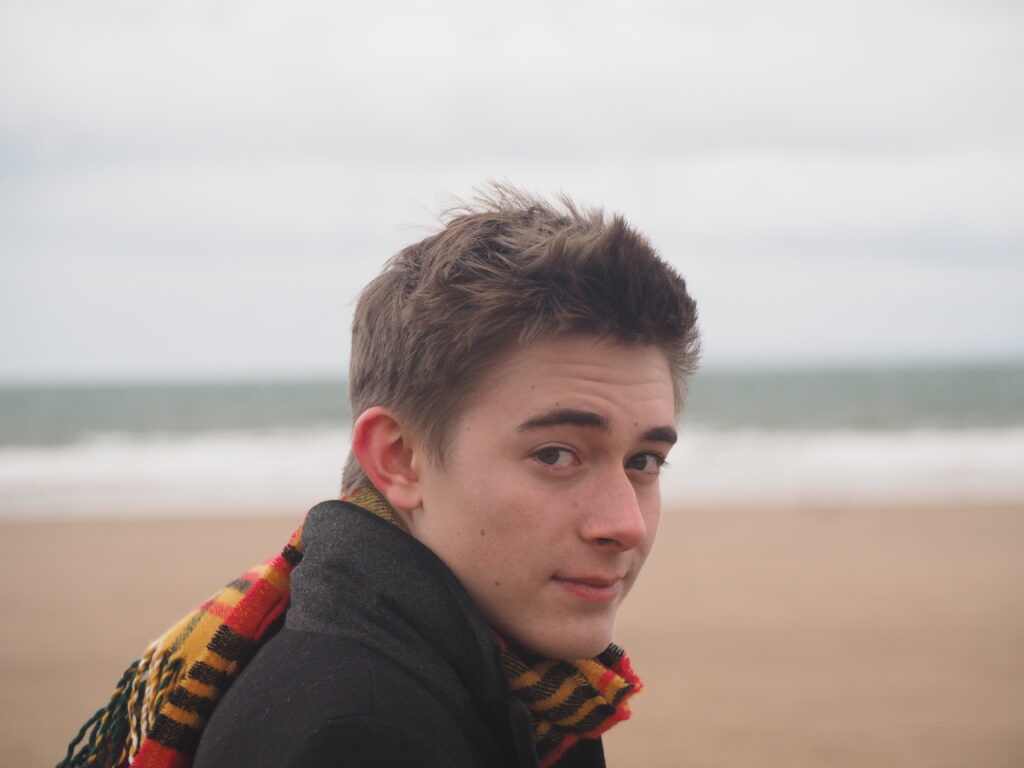 I love listening to new music. But not usually for very long. I’m always in the writing, recording, producing or artwork stage of my own music, so more often than not, new music is a distraction that pulls focus. But, like any other recording artholes you might meet, I am always seeking to hear something that makes me curious in music again, something I didn’t think of – a melody, a chord sequence, a story, an instrument or an innovative approach. I hear a lot of things that do not turn me on, but when I do hear something, I revel in the fascination and like to tell everyone else about it.

Alex Pester’s new album ‘Lover’s Leap’ is such a fascination.

At only 20 years old, it’s not only a f*** off accomplishment to have made three albums already, but more importantly, he makes any clue that he’s using technology to record it completely invisible. His is music for people who want to hear music that could only have come from a beating heart, a raw imagination full of ideas and a deep relationship with sound. There’s a good reason I, and many others continue to listen back to albums recorded in the late 60s. Whether it’s Floyd, Hendrix or Joni Mitchell, it’s quite clear that whatever the intention of those artists was at the time, the tools they were using to produce their soul intention is precisely that: they used the tools. And the tools never really used them. Alex’s latest album works in exactly the same way, and I for one have learnt something from his beautifully human and sincere approach to sculpting songs. It’s almost as if each track you hear hasn’t been filtered, at any stage, by the conventions or limitations of modern technology. Not being able to count along from 1 to 4 in the rhythmic structure of any song is also a good sign that the composer is faithfully following their own reaction to the musical ideas that are born in their head, and not fit it into a tired box of conventions. Lennon did this a lot, as did Zappa and later, David Byrne. This is not music by numbers. It’s making musical ideas manifest as accurately in our ears as they did between the ears of the creator when inspiration struck.

I’m not a fan of comparing artists to other artists, especially when they have their own unique character spilling out into each syllable they sing, but I know it’s sometimes helpful if you haven’t heard the artist before. In the mid to late ‘60’s there was a musical love affair between The Beatles and American singer songwriter Harry Nilsson. Famously, at a press conference, The Fab Four were asked “Who is your favourite American band?”, they all replied “Nilsson!”. Invariably it takes one genius to recognise another. And The Beatles and Nilsson had this going on between them. Alex’s approach to many of his songs has a root in that cross-Atlantic relationship. The confessional lullaby style of McCartney, the liminal lyrical leaning of Lennon and Nilsson’s very own crooning caress. This would be impressive for an artist in their late twenties, but given that Alex is only 20, it’s thrilling to know that these are preliminary explorations for what will no doubt transition into a truly captivating career to come.

Colours of the Canterbury scene of the late 60’s and early 70’s recall Caravan’s Golf Girl as well as Nick Drake’s most beautiful string laden tracks from Five Leaves Left (courtesy of supremo cellist Jo Lewis). The spoken word passages are also glorious, particularly in ‘It’s Only Tea’. Other artists who have delved into the English folk sound of the early 70’s often come across with more aural corn dollies and five pointed stars than I would even be able to cope with on a good day in my favourite Glastonbury bookshop. But Alex’s authentic acoustical Albionic arc as a sometimes-backdrop, is perfectly balanced with psychedelic rock sensibilities that might make you want to go into a bookshop in Glastonbury in the first place. To ask for something ‘secret’.

Few singer songwriters manage majesty and intimacy in equal measure as Alex Pester does on Lover’s Leap. Some of us like to get into an artist because they deliver what we are comfortable listening to, and some of us want to be surprised, challenged and mesmerised by an entire musical world that an artist is creating, because they are seeking. Not just for themselves, but for all of us.  I’m a fan of the latter, and if you are too, I’d heartily recommend getting into the world of Alex Pester. It’s a world you can lose yourself in, and find some musical treasure that you didn’t know was still possible. Make the leap and listen to Lover’s Leap.

Tim Arnold is a musician, film maker and activist –  @timarnold

This site uses Akismet to reduce spam. Learn how your comment data is processed.